Own a Piece of Paradise near Rachel, Nevada!

Wouldn't you like to get away from it all? Enjoy all the benefits of clean air and country living? Experience the freedom of wide open spaces? Well, Toreson Industries (official website) is giving you the chance. For $16,500 you can own a 1.2 acre lot at Lincoln Estates, a hypothetical housing development 6 miles west of Rachel, Nevada.

Of course, it's been hypothetical for at least 15 years now. We met Toreson himself back when we first arrived in Rachel in 1993, and he had the same plan. He had just bought this huge hunk of barren land west of Rachel for what he thought was a bargain price and planned to turn it into a residential community. Nothing much seems to have changed since then, except Toreson now has a new website.

The sadness of the proposition is clear when you read Toreson's list of local services. The site acknowledges that there's no Wal-Mart, no Home Depot, but there are "farm-fresh eggs." In other words, people who move to Lincoln Estates will be eating a LOT of eggs. There's also a bar and restaurant (the Little A'Le'Inn) and a convenience store/gas station.

Oops, Toreson failed to note that the convenience store has now closed, so there's no gas within 50 miles.

There are, however, "gourmet restaurants" in Alamo, some 60 miles away. (It all depends on how you define "gourmet.") Schools are located in Alamo, a mere two hour bus round-trip journey every day. (Helps instill character in children.) "These schools are in a safe, crime free, wholesome, environment and have caring teachers." (Again, it depends on how you define "wholesome" and "caring".) You can always take the bus to Las Vegas -- as long as you can get to the bus stop in "nearby" Alamo.

Lincoln Estates is at least 2-1/2 hours from the Wal-Marts and Home Depots of Las Vegas. (Toreson says 2 hours, but that assumes illegal velocity and no traffic in Las Vegas itself.) At current gas prices, that's about $50 round trip in the average car.

Toreson fails to mention that you can save a little gas and a lot of money by purchasing a similar lot in "downtown" Rachel for less than half the price of his.

A better funded version of a similar land scam is Coyote Springs (official website), a hypothetical development you may pass through without noticing on the way to Rachel. It is "only" 60 miles from Las Vegas, and at least it has a partly built golf course (our field report). There are some deep-pocketed investors behind Coyote Springs, but even they haven't been powerful enough to etch a community out of the raw desert. 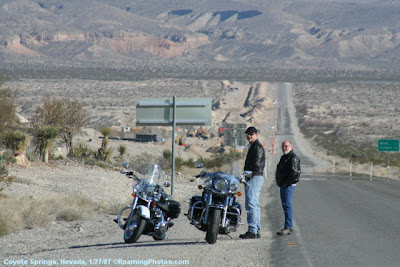 Remember the old saw about real estate: "Location, location, location." In both Lincoln Estates and Coyote Springs, the location sucks. Starry eyed city slickers don't seem to understand: Out here, you don't own the desert; the desert owns you. You can stake out a tract of land and call it yours, but the desert doesn't recognize your claim and is going to win in the end.

Old man Toreson has been imprisoned by his own land for over 15 years -- which may be the inspiration for his latest scheme. According to local reports (which we haven't verified), Torson now hopes to build a 2000-bed prison on the land. We hear that Rachel residents plan to hold a town meeting about the proposal on Sept. 6.

It's pretty much the same thing: Whether you sell people the land or force them to live there under court order, they are still imprisoned.


8/25/08: Here are some message threads at Dreamland Resort regarding the proposed prison: Disaster in Rachel, Prison in Lincoln County. No worries mate! There ain't gonna be no prison. No public or private prison operator could possibly consider it viable.

Posted by Glenn Campbell at 5:33 PM