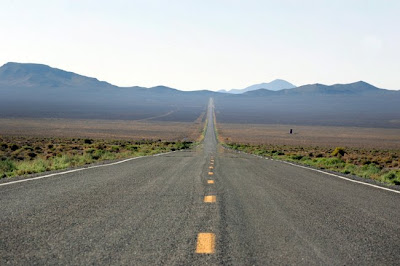 An article in Sept. 7 Las Vegas Sun profiles the current residents of Rachel, Nevada, which appear to number about 65 actual living souls.
The home they love, for now: Jobs be damned, say residents who prize freedom, stars and sunsets

On Thursday many of the residents of Rachel will meet at the A’Le’Inn to caravan 110 miles to Pioche, the Lincoln County seat, to try to stare down the proposal to put a prison four miles from their community center.
The prison lights alone will ruin the gorgeous sunsets and stargazing available where there isn’t a man-made light taller than a front porch within 100 miles.
The man who wants to build the prison on 1,000 acres here also wants to build a housing tract next to it called Lincoln County Estates. Over the years there’s been talk about building a solar plant and an old folks’ home on the land, but those turned out to be just rumors.
But the prison talk is real and the Lincoln County Planning Commission is being asked by the developer to grant a special use permit allowing a medium-security prison. ...
Toreson’s plan is to build the prison, find a company to operate it, and then for the state, whose prisons are crowded, to pay to house overflow inmates in Rachel. California has private prisons; Nevada does not.

Naw, not real. We think it's still a figment of Toreson's imagination. Totally Looney Tunes.
Nevada's prison's are overcrowded not because of lack of prison's per se but lack of money. There's still a state facility at Jean that is underutilized.
Like in the movie business, people in the desert with big ideas are a dime a dozen. People with funding, however, are rare, and Toreson obviously doesn't have any. All he's got is the land.
The most imporant thing missing from the proposal is labor. Where are the prison guards and staff going to come from? The commute time from Las Vegas or even Alamo is huge, and you'd have to pay a huge premium for force people to live in the middle of nowhere.
It's a fantasy proposal that will go nowhere.
Posted by Glenn Campbell at 3:57 AM