A new member seems to have mysteriously appeared in the ranks of the Groom Lake Interceptors. She is Chameleon, a shape-shifter.

Chameleon's special Interceptor superpower is that she can turn into almost anyone at will. This is accomplished through a combination of method acting, voice control and secret holographic technology that changes her facial features. Chameleon's unique skills are best illustrated by her very, um, interesting day job, show in the posters below. 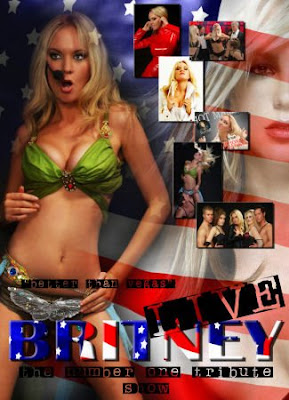 That's right: She's a professional Britney Spears and Christina Aguilera impersonator! She makes good money at it touring the U.K., Europe and the Middle East. She also does a killer Marilyn Monroe and can even sing up a storm in her own voice.

You may also notice that she has another unique superpower: When she's in character, SHE CAN COMPLETELY FRY THE BRAIN OF ANY MALE WHO LOOKS AT HER! The body you see above has not been retouched in Photoshop. It is the product of 1000 sit-ups a day and an intense on-stage work-out whenever she puts on a show.

Imagine the use we can put her to at Area 51! She could paralyze the Cammo Dudes by singing a Britney Spears number while we sneak in the other way.

You may ask: How do we, the male Interceptors, look at her and not get our brains fried? This is accomplished with a set of special sunglasses available from me for $20. She's also not lethal when she's not in character. Off stage she has a fantastic mind and an ageless wisdom that seems quite inconsistent with her various bimbo personas. Hopefully, she will add some much needed balance (or better yet, imbalance) to our group.

One thing you need to know about Chameleon: No one knows what she really looks like. "White chick" is about all that any of us can nail down. Her real identity is a closely held secret, and the rest of us are only beginning to fathom it. The whole shape-shifting thing apparently started as the result of an accident in a government lab, but we haven't learned all the details yet.

Ms. Chameleon fits into my own nefarious plans to revive the Interceptor franchise. No longer are we going to be held down by OLD PEOPLE who hardly do anything, as though their TV series has been cancelled. We're going to build a whole new "Next Generation" of Interceptors who go boldly where no Interceptors have gone before.

Icon source
Posted by Glenn Campbell at 8:34 AM