Interceptor Cast: The Council of Elders 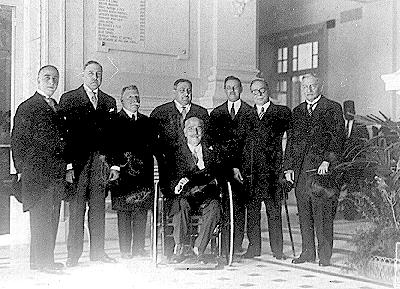 In the course of defending our honor at Dreamland Resort (see "Burning History"), SHADOWHAWK put together a pretty good summary of the original Interceptor core group. There were many others, but these nine compose the "Council of Elders" who the rest of you are expected to bow down to. At present the Council is 78% not dead, but this number could change at any time. Shadowhawk's summary, as posted:

For those who don't remember their history, there were nine of us.

Jim Goodall is considered to be the first. He was known by several code names (Yes, we all had silly code names. We never took ourselves too seriously). Jim was variously known as "The Great One," "Agent Orange," and "Spy Two." He was an aviation author who documented the Blackbirds and stealth aircraft from before the time many of them were delcassified. He spent agreat deal of time lurking around Tonopah and Area 51. For whatever reason, he was also intrigued by the testimony of Bob Lazar, who claimed to have worked with alien spacecraft in an underground government facility. Jim remains, fundamentally, an airplane nut, not a UFO nut and works in aircraft resoration at the Museum of Flight in Seattle, Washington.

John Andrews, "Spy One," of Testors Corporation - the company that brought us platic models of the "F-19" and "SR-75" - was a gentleman in all respects, with more manners and grace than all the other Interceptors combined. He worked for years designing plastic model kits of both real and hypothetical military craft. His greatest quest was to release models of secret aircraft before the government acknowledged their existence. He passed away some years ago.

Mark Farmer, "Agent X," was a freelance journalist and photographer from Juneau, Alaska. He was always one to push the limits of the envelope, be it in military watching, in extreme sports or in matters of taste. He had all the latest hardware: night-vision goggles, telescope, camera with a mammoth telephoto lens, scanner radio, survival rations for a week. And of course he was stylishly attired in camouflage fatigues that were exactly appropriate for this particular desert background.

Tom Mahood, "Hand," was a traffic engineer from Irvine, California, with a secret passion physics. After slinking around with us along the border of Area 51, he went on to earn a physics Master's degree in the subject of gravity, motivated by the desire to prove or debunk certain UFO claims. He then worked for a short time at a government laboratory in Washington State that was conducting serious research into the nature of gravity. He eventually returned to traffic engineering. He was an excellent investigator, completely focused on solving the current mystery, whatever it it happened to be. Once a mystery was solved, he cast it aside like a completed crossword puzzle and moved on. That was how he treated Area 51. Tom was the second person known to have climbed Tikaboo Peak for the express purpose of viewing Area 51 and the firs t to create a trail up to the peak. He also located the crash site of an A-12 (Article 125).

Mike Dornheim, "The Ayatollah," was a Los Angeles-based aviation journalist and arch-skeptic. As West Coast Editor for Aviation Week and Space technology Magazine, he fought unsucessfully against publishing unsubstantiated stories about myhical aerospace planes. He believed in data, not speculation, but his was a lone voice crying in the wilderness. He died in a tragic car accident a few years ago.

Jim Bakos, "Agent Zero," was a machinist from Hemet, California, known for his good-natured enthusiasm, whose proudest accomplishment was the design and manufacture of the official Interceptor decoder ring. Agent Zero owned his own machine shop, stamping out various metal connectors and other parts, and some of his biggest clients were military contractors. Not wanting to bite the hand that feeds, Zero kept a low profile regarding the news media.

Stuart Brown, "The Minister of Words," was a staff writer for Popular Science magazine, living in Hollywood, California. He documented some of the Interceptors' antics in print and in television interviews. He currently lives in New York.

Glenn Campbell, "Psychospy," was the only Interceptor who actually lived near Area 51. He was a computer programmer who developed an intense interest in all things related to Area 51 and moved to Nevada(Does this sound like anyone else we know?). In January 1993, he drove his camper from Boston to Rachel and moved in behind the Little A'Le'Inn. Over the next several years, he explored every detail of the area, published the "Area 51 Viewer's Guide" and organized the initial events that brought the Interceptors together. He appointed himself public relations officer for the secret base and entertained every form of visiting news media. He tread a narrow path between beliver and debunker, and was more interested in the psychlogican and cultural aspects of Area 51 than in secret aircraft. His greatest contribution was the ability to network people. By introducing a disparate collection of researchers to each other, he created something that was truly greater than the sum of its parts. He also introduced the first comprehensive Area 51 web site and unearthed key information that helped remove the shroud of mystery that surrounded the Groom Lake base.

I (Peter Merlin), a.k.a. "Shadowhawk," billed myself as an aerospace archaeologist and historian. I specialized in collecting data, documents, and artifacts realted to flight-testing and Area 51. I was also the first person known to have climbed Tikaboo Peak to look at Groom Lake. Of all the original Dreamland Interceptors (ODI's), I'm the only one who has continuously researched the subject of Area 51 without interruption in the years since the Interceptors faded from the scene. I'm proud of my contributions to Dreamland Resort (the best Area 51 web site ever!) and Roadrunners Internationale that help preseve the legacy of Area 51. I wouldn't have gotten as far as I have in this endeavor without Glenn's help and that of the other ODI's. Let's not throw all that they have done on the fire.

"ODI" is okay, but we prefer "Council of Elders." They're the useless old guys who don't have much power left, but everyone pretends to honor them. They also get the best parking spots at the Black Mailbox on account of their seniority.