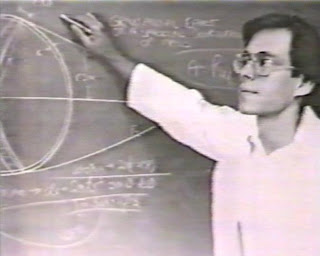 It's good to know our friend "The Bob" is still making big plans. Hand just alerted us to this article in the local Argus-Press in Shiawassee County, Michigan. It seems the forward-looking government in the small town of Laingsburg (population 1223, wikipedia) is welcoming Lazar's United Nuclear Scientific with open arms.
New business coming to Laingsburg, June 6, 2008
An excerpt...

LAINGSBURG - A boom of economic growth is heading to Laingsburg as United Nuclear Scientific, LCC, a distributor and manufacturer based in Sandia Park, New Mexico, will be relocating to downtown Laingsburg later this year. 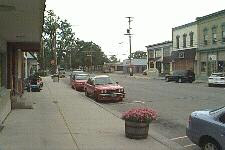 “We are excited about establishing our business in the local community,” company owners Bob Lazar and Joy White said.
Lazar added he and his wife chose Laingsburg for the comfortable rural setting and family ties to the area.

White's son, Chris Hopwood, will be working at Michigan State University and lives in Shiawassee County.

UNS's purpose is to put the “fun” back into science as a hobby. They manufacture a wide range of scientific products of their own design, such as Nuclear Cloud Chambers - which allow you to “see” radiation.

The company started a decade ago doing government contract work in New Mexico.

“We wound down our (government work) because we will be out of the area,” Lazar said. “We will be primarily on the retail end now.”

The retail sales division of UNS Supplies is expected to employ a minimum of five people from the start. Lazar expects the number to be “significantly more than that.”

The company will also focus on a hydrogen fuel system division which is expected to come online starting in 2009-10, and will manufacture hydrogen fuel conversion kits for most U.S. and foreign cars. This could create more than 50 jobs when fully operational, Lazar said. “We needed to tap into the job market of talented people, like out of work auto workers, that are here,” he said.

Lazar is a scientist who has previously worked at Los Alamos National Laboratory and was involved in various classified government projects. His wife, Joy, is a licensed aesthetician (skin care specialist) with her own business.

“We are grateful to Bob and Joy - this means some really terrific benefits to the city and its residents,” Laingsburg Mayor Michael Culpepper said.

Of course, we all know Lazar is a "scientist" because he's wearing a white lab coat in the famous photo at top. But wonder why Bob would want any publicity at this point. Why can't he move into Laingsburg in his usual stealth manner?

We understood "United Nuclear" as Lazar's shell company when selling items on eBay (motto: "We specialize in small orders." website), but apparently it's growing fast. (Here's his own announcement of the move.) He now plans to employ five people, but as many as 50 eventually. In a TV news report ("Supply Company Relocates to Mid-Michigan") that number has since expanded to 80 hypothetical workers. (And here's a similar report from another TV station.)

If he managed to employ just the five, that would seem news enough. Laingsburg probably needs the business. Unfortunately, Lazar has a long history of big plans that never quite materialize. One wonders what volume of "government work" Lazar was giving up in New Mexico when he "left the area."

Whatever happened to the "Terraforming" project in a missile silo near Roswell? (clui field report) Wasn't William Shatner (i.e. "Captain Kirk") involved in that one? Some investors sunk some money into it. Did they earn it back? Must not have worked out of Lazar is leaving the state.
And then there's the corporation the Robert Bigelow funded in Nevada -- something to do with researching "Element 115." What ever happened with that? (See Psychospy's 1997 article: "Lazar Theory #1: Fraud for Bigelow Funding.")

Our friend The Bob has a way of starting big things but never quite finishing them (like certain UFO claims in the desert). We wonder if the people of Laingsburg fully understand, and we hope no municipal money has gone into this.

But wait, there was another line in the article above:

UNS has been working with the city, LBA, Baker College of Owosso and the Shiawassee Economic Development Partnership (SEDP) to facilitate the relocation process.

Ah, so that's it! VERY interesting.
Posted by Glenn Campbell at 7:14 PM