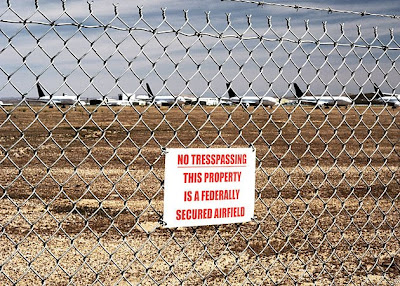 Reminiscent of the past, Popular Mechanics (the low-class rip-off of Popular Science) has announced the location of the "new" Area 51. It's the Mojave (California) airport, shown above, and the "commander" of the base is aircraft designer Burt Rutan. Here is their article in this month's issue:

New Area 51: Mojave's Desert Outpost Holds Space Flight's Future
Some of you may recalled that back in June 1997, Popular Mechanics made waves (and sold a lot of copies) by announcing that Area 51 had moved to an abandoned missile site near Green River, Utah (summary). The dimwitted PM reporter had confirmed this by visiting the Groom Lake border and finding a locked get there. (The gate, which was pictured in the article, was on a remote rancher's road not connected with Area 51.)

There is no evidence in the article that he actually visited Green River, but one of our operatives did, shortly after the article was published. The facility was surrounded by a fence, but the gate was open, and our operative walked right in! No signs of security, no Little Green Man, only a few concrete bunkers (report).

So they must have moved Area 51 yet again as soon as PM caught up with them. And now, at last, PM has revealed where they moved it all to: Mojave, California.

The Minister of Words writes: "BTW I ran into a buddy who works at PM and asked him about Jim Wilson, the guy who turned getting lost into the scoop that A51 had moved to Utah. He said Wilson made up so much stuff during his time there that even PM felt obliged to fire him."
Posted by Glenn Campbell at 9:40 PM