It was a rock!

My bad. I didn't exactly lie in my previous post, but I didn't tell the whole truth either. I don't know how anyone is ever going to trust me again. I'm ashamed. I apologize profusely.

And yet, what is that tingly feeling? Could it be... fun?

Here's what happened: I was editing a series of routine photos from Tikaboo Peak. I got to a sequence of shots of a father and son throwing rocks off the cliff on the west side. (It's a boy thing: Every male at the top of a cliff feels the need to do it.) I got to the image in question, and it occurred to me: "Wow, what a great UFO shot!"

That's when I set up the puzzle. It took me all of five minutes. How could I lead people to think this thing was something unusual without actually lying? I was like a magician setting up a trick. The secret is: create a diversion. I did this by releasing a quantity of irrelevant data -- exact time of day, camera f-stop, shutter speed and ASA -- while quietly withholding relevant data, like what the two witnesses and I were doing at the time.

I said, "I can't say what the triangle is." The reason I couldn't say, of course, was because it would spoil the trick!

The triangle itself was ambiguous in isolation, but when you pulled back and looked at the whole scene, I thought it was pretty obvious: The man's arm is recoiling as though he had just thrown something. Why else would his arm be across his face like that? So the solution to the mystery lay not in the object itself but in understanding human beings and how they move. As usual, no matter how good the "evidence" may be, it always comes back to an evaluation of human perception, motion and motivation.

I posted the photos only to my own blog, and I made no attempt to promote it elsewhere. When the photo made the jump to Dreamland Resort, it was none of my doing, although I didn't actively object. When the person who re-posted it asked me for permission to do so, I wrote back "You can do whatever you want with the photos, as long as you refer readers back to my blog entry as the source."

My bad again. But the poster didn't ask me any questions about the object, like its trajectory, sound, etc., so there was nothing else for me to answer. In fact, no one posting at the DLR forum asked me anything about the sighting. If anyone had asked, I would have replied coyly and evasively, which would have been a dead giveaway that something was up.

I sent the same photo to the Original Dreamland Interceptors (ODI), and they immediately shot back annoying and un-fun questions about the craft's trajectory and sound and what I meant by "can't say."

Within 24 hours, things had gotten out of hand and I was getting feedback suggesting this thing was going worldwide. I decided then to bring the experiment to a close. I could have let it gone on for a week or so, but that wouldn't have been healthy. So I "fessed up" on the DLR forum by posting the "before" picture in the rock-throwing sequence. Now you clearly see the man's arm in motion and the rock following along the same trajectory.

One DLR member then wrote to me: "You of all people should not create a hoax. If this is a fake, post your mea culpa."

I thought I just did! There's the man throwing the rock!

This was the first time I ever posted anything on DLR -- and probably the last. This is the place for postings about hardware and facilities, period, with little toleration for anything human. And one gets the distinct impression they really don't like Glenn Campbell there. In fact, it seems to be the official Glenn Campbell anti-fan club (which is flattering in a way), and anything I say or do just riles up the hornets even more. One wrote: "12 years a fan of yours and no more.... grow up." Others had less nice things to say.

I had inadvertently trampled a sacred icon: the triangle. That's what the black world watchers are looking for and can never quite find. If you mess with the triangle, it's like you've desecrated the Koran or something. The believers are not going to like you.

UFO watchers are looking for discs, while military watchers are looking for triangles. It's a little like dogs chasing cars: It isn't clear what either group will do once they actually catch what they're after. In the case of the military watchers, the object is supposed to be super-secret military aircraft, for a purpose that isn't quite clear, built by humans but not acknowledged by the government. In their universe, the government is hyper-efficient and has unlimited funds to build and deploy aircraft of extraordinary ability while keeping them totally secret. If you lurk outside Area 51 for long enough, you are bound to see them.

I have a different take: Having dealt with government at many levels, I see it as hyper-inefficient, wasting vast sums of money with little to show for it and unable to do anything without leaving huge tracks in the sand. Setting aside any aliens (who by definition are capable of anything) what's out there at Area 51 is probably minor variations on what we've seen already. I lived for 2-1/2 years in the shadow of the base and never saw anything I couldn't explain -- but of course I wasn't everywhere, so there's always room to believe.

And thanks to the publicity Campbell helped generate, the black triangles have probably been moved elsewhere -- to the next base, or the next. That's what keeps hope alive. I've been away for ten years, but remarkably little has changed. The celebrated "Aurora", which was supposed to be ripping the sky open 15 years ago still hasn't emerged, but that hasn't killed the dream. The sacred triangle is out there, waiting to be photographed; you just need a long enough lens at the right opportunity and nirvana will be yours.

Every religious group wants something yet paradoxically doesn't want to find it. (Wouldn't it put pastors out of business if Jesus actually returned?) If there was a new triangle out there, and you photographed it and nailed it down to a specific program, it was instantly become routine and uninteresting (like the clunky F117A), and your raison d'etre would go away. The military skywatchers are sustained only as long as they believe there are new triangles yet to be discovered, and the best kind are those that don't exist, because they can never be nailed down to reality.

The function of religion is to continually place barriers between you and your goals. That's what keeps the religion alive and the believers occupied. Likewise, the black world watchers want the truth while at the same time not really wanting it. They've got the notion that their life will be fulfilled if they can capture that sacred triangle, which of course is a delusion. They avoid facing reality by placing more and more barriers between themselves and the triangle. When someone provides the triangle, as I briefly did, it short-circuits the system and destabilizes the religion. The priests are going to get restless!

So now I've slipped into my old role as government disinformation agent. I'm the guy the government sent out to "muddy the waters" so the real black triangles can slip in and out of the base unnoticed. Actually, I'm pretty comfortable with this. Only wish I had the government salary: You know, the hundred dollar bills slipped under the table from time to time. (Hint, hint!)

If I had a few hundred more, I could buy a bigger lens -- a wide angle one. 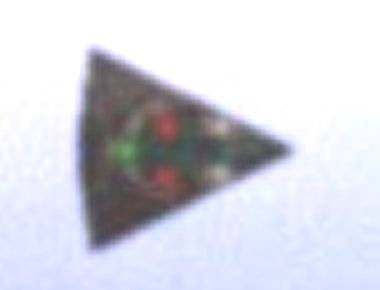 Drawing source.
Posted by Glenn Campbell at 10:54 AM