I can confidently say I had nothing to do with this. Learned about it just now on Twitter.
I think you pretty much got the whole movie in this here trailer. Worth the 2:23, I'd say! (But not necessarily worth the two hours to sit through the movie.)

It's not the only Area 51 movie in the pipeline.
Posted by Glenn Campbell at 4:36 PM 4 comments:

I am Investigated by Homeland Security for Suspicious iPhone Photography! 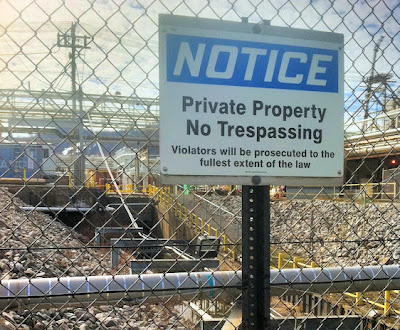 Honest, I'm trying to be good. It has been years since I've tested security at Area 51, and I've been trying my best these days not to antagonize authority. Still, every once in a while, authority and I seem to bump into each other.

Turns out, I have been investigated by the FBI and Homeland Security! Not in the 1990s, but within the past week.

Two days ago, I got an email from a driving client. One of my business schemes is to drive people's cars and pets across the country, and I had driven this car from Cleveland to Florida in late November. The client was a bit concerned because he just received a visit at his Cleveland office from an FBI agent working with Homeland Security. Apparently, the federal government was concerned about my activities while driving the car.

As the story goes, a man was lurking outside a chemical plant in West Virginia on Nov. 29, taking photos. As soon as a security guard approached him, he jumped in the car and drove off. In this era of heightened security, there was concern that he might be a terrorist casing the facility for a future attack.

That was me! I emailed the client that it was true: I was indeed taking photos outside a chemical plant. Only the "jumped in the car and drove off" part wasn't quite right.
I was lucky that my client was a lawyer, familiar with the concept of "innocent until proven guilty". (Most people would be totally freaked out by a visit from the FBI, regardless of guilt.)

Truth is, I had stopped for a couple of minutes along the side of a public road and snapped three photos with my iPhone of this pretty DuPont Chemical plant on the banks of the Kanawha River in Belle, West Virginia. Above is one of the photos. Although it shows a No Trespassing sign, it clearly establishes that I am on the GOOD side of the sign and that a fence prevents anyone from going any further. For the record, there was no No Photography sign of any kind (which I doubt would be legal anyway).
These weren't my best photos by any means, just bearly meeting my standards for publication. Later in the day, I posted them in my Virginia and West Virginia album.

The exact location, on Google Maps, is here. (I know it for sure, because it is a point where a stream enters the plant, as shown in the photo below.) The other two photos were nearly identical, as shown below... 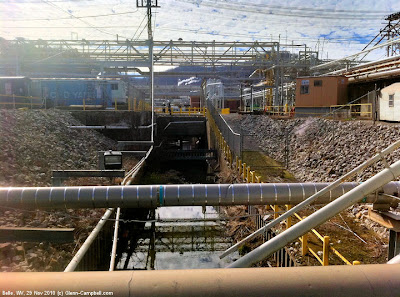 You see some tiny people on the bridge, who may have notice my presence.
The photos were taken with an iPhone app calls proHDR, which analyses the scene, takes two photos and combines them into one (for more vivid colors). So I had to stand there for 30 seconds for each photo. My entire excursion a few feet out of the vehicle lasted no more than 5 minutes, but as I was getting back in the car, an unmarked pickup truck pulls up across the road from me, driven by a security guard with Wackenhut insignia.
Right away, I know what was happening, and it amused me to no end. This was a CELLPHONE camera, and I'm on a public road. Instead of "jumping in the car and driving off", I sloooowed myself down to West Virginia speed and waited for the guard to come over to the car.

At this point, I was in the driver's seat of the car, and I rolled down the window as he approached. He was a very timid guard, obviously inexperienced. He asked me if I was taking pictures. I said I was, and I showed him my iPhone. He asked me why, and I said I was just driving by and the plant looked pretty.

I pointed out that I was on a public road and there was nothing illegal about taking a photo here. I then SHOWED HIM THE PHOTOS I HAD JUST TAKEN, but I also made sure the phone remained securely in my own hand and not in his.

I pointed out the photos were very low resolution and that any terrorist can get better photos of the plant from Google Earth without leaving home. (If it had made a difference, I could also have talked to him at length about the only federal photography statute, 18 USC 795, and its case law, but clearly this fellow didn't have a clue about anything called "law".)
The guard then asked me if I would come with him—apparently inside the plant.

I said (in a slow West Virginia way): "I see no reason at all I should come with you. I haven't broken any law. You want me to go from a public road, where I have rights, onto private property, where I have none? I'm sorry. If you want to call the police, you can, but I'm not going anywhere with you."

He then said he would have to record my license plate. I said: "You can do anything you want." I then patiently waited for him to walk to the back of the car and write down the plate number, then he walked back his truck and I SLOWLY drove away.

He didn't even have the courage to ask for my name or ID. (If he had, I would have SHOWN him my ID, but it wouldn't have left my hand. This is not a law enforcement officer, and I am not on his property. I have no obligation to give him anything, and I put myself at risk if I do.)

So then, a month and a half later, the FBI visits my client, the owner of the car.

I think my client/lawyer did a pretty good job of defending me. He gave the agent my name and phone number, but he also pointed out that I take a lot of photos, which are available online. He suggested to the agent that I was probably just driving by on the trip from Cleveland to Florida and stopped to take a photo of something that struck my eye.

The FBI agent told my client he would contact me, but it hadn't happened 24 hours after the visit, so I called him myself! Yesterday, I called a number the agent gave my client and introduced myself. The agent knew who I was right away! He said he had been looking me up on the internet and was quite impressed with what he found. As far as I could tell, he had no special knowledge of me from FBI files, but he seemed to have a pretty good grasp of what I was all about just from what he gleaned on the internet. Honestly, I should have more fans like that!

I told the agent the whole story (with great amusement), and it seemed to satisfy him. He said they investigate 100% of these complaints, and most of them turn out to be dead ends like this one. Although he didn't say so explicitly, I imagine the case is closed.

I think the agent was relieved that I called. He had found my Facebook page (which is mostly public), was looking through my massive cache of photos and had been debating about whether to contact me. My call relieved him of the burden of deciding.

I told the FBI agent he should friend me... although I imagine they're not allowed to do that (friend the person they have just been investigating for possible links to terrorism). In any case, the phone call ended with no further action required.

But is the case really closed? If the agent looks more closely at my Facebook page, he will find that I spent Christmas in PALESTINE—a hotbed of terrorism. Maybe I was delivering my iPhone photos of the chemical plant (because the internet isn't secure enough). And where else would terrorists strike first than West Virginia? After all, it is the crossroads of Appalachia. A Bhopal-style accident might wipe out the entire town of Belle and a few more communities down the river. Why hit Manhattan when you can strike at the heart of America?

Fortunately, I am not the young Psychospy of the 1990s. He would not have taken it so calmly. He would have come back to Belle with the biggest-ass camera lens he could find and shot the hell out of that plant! He would have taunted those Wackenhut dudes from two inches outside the boundary until the local police came and there was an assertion of rights. Of course, there would have been a website recording all this. It might have got ugly.
This incident wasn't damaging to me, but it could have been to someone else. When the FBI visits your employer, that can have a huge effect on the security of your employment, regardless of your guilt. This spurious complaint is also using up a significant amount of law enforcement resources—at least a day of one FBI agent's time. Is it Dupont's policy to report anyone to the FBI who points a cellphone at the plant? If so, Dupont is probably doing a lot more damage to national security than helping it.

It irritates me that I'm engaged in a legal activity on public property, I'm completely open about what I'm doing and am willing to answer questions, and still I get pulled into an FBI investigation. The only "crime" I committed was choosing not to go inside the plant's property when I was asked to. Had I been less certain about my rights, I would have essentially been kidnapped to a place where I had no rights. Once I was on their property, could Dupont have seized my iPhone?
What are Dupont's policies on this? I'd really like to know.

Email ThisBlogThis!Share to TwitterShare to FacebookShare to Pinterest
Labels: Wackenhut 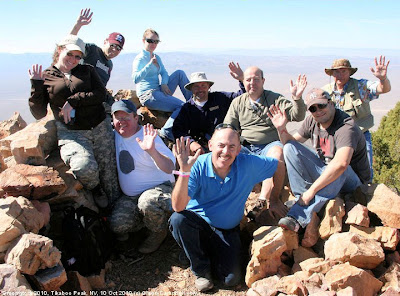 Groomstock 2010 is three months past now, and I forgot to post any photos, so here they are...

Groomstock 2010 Album
We had a nice time, but not really much to report. No helicopter fly-bys. No encounters with security. Just your standard secret base doing what secret bases do: sitting there. It was a surprisingly small group, given that the WHOLE WORLD was invited, but it's quality that counts, not quantity. (In addition to those shown here, there were several who camped with us but didn't make the hike, including Agent Coyote from our early years.) The trip proceeded as previously announced, with most of us camping at the trailhead and a few staying in Alamo.

I have no idea yet whether there will be another Groomstock in 2011. (If there is, it will probably be in the summer.)
Posted by Glenn Campbell at 9:33 AM No comments:

Email ThisBlogThis!Share to TwitterShare to FacebookShare to Pinterest
Labels: Groomstock
Newer Posts Older Posts Home
Subscribe to: Posts (Atom)
In the 1990s, I was the unofficial publicist for Area 51, helping to make it a household name. Although, I am no longer actively researching the base, I may occasionally have some information or links to pass on. This blog and the Tikaboo Peak Page on Facebook are my forums for doing so.