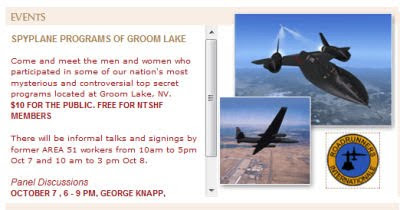 Here's your chance to meet former Area 51 workers in person!

Agent Shadowhawk sends us the following press release on a public event coming up in Las Vegas. (Unfortunately, I won't be in the city at the time.) This presentation "will separate the myths from the realities of Area 51" -- if, that is, you want the myths separated from reality! (Personally, I prefer them mixed together.) Looks like George Knapp will be moderating (so they won't be totally separating myth from reality). --GC

On Wednesday, October 7th, and Thursday, October 8th, the Atomic Testing Museum and Roadrunners Internationale will separate the myths from the realities of Area 51 through a special presentation: SPY PLANES OF GROOM LAKE (AREA 51).

The Atomic Testing Museum in Las Vegas, Nevada, is partnering with Roadrunners Internationale, an alumni organization for Groom Lake workers, to provide first-time public access to former U.S. Air Force, CIA, and contractor personnel who worked on some of the nation’s most closely guarded Cold War projects under a strict blanket of secrecy. This is an opportunity for the public to learn the history of the secret Groom Lake test site and the role it played during the Cold War, and to discuss newly declassified details about cutting edge technologies with the people who developed them. Lectures and moderated discussion panels will include former and current CIA staff, military commanders, historians, and other notable individuals.

There will be opportunities both days for the public to “meet and greet” former Area 51 test pilots, engineers, and technicians and ask them questions. A temporary exhibit will feature actual Area 51 artifacts, memorabilia, and photos. Events on Wednesday will include presentations on the history of Area 51 and Project OXCART by historian Peter Merlin, followed by a panel discussion with people who actually worked at the secret Groom Lake test site. Moderated by KLAS Channel 8 investigative reporter George Knapp, this panel will feature CIA Historian Dr. David Robarge and former pilots and engineers from Area 51. On Thursday, historian Paul Suhler will give an in-depth presentation on CIA projects Rainbow and Gusto and the design evolution of the triple-sonic A-12 spy plane, followed by a discussion panel of former Groom Lake pilots, staff, and technicians moderated by author Annie Jacobson.

Admission is $10 per person and FREE for Museum members. Museum admission is just an additional $5 for those attending this event. Books and souvenirs will be available for purchase at the Museum gift shop and from representatives of the CIA employee store.

The Atomic Testing Museum is located at 755 E. Flamingo Rd., between Paradise Rd. and Swenson St., on the south side of the street. There is ample parking and the museum is ADA accessible. For more information please call (702) 794-5151.
Posted by Glenn Campbell at 4:24 PM No comments:

Email ThisBlogThis!Share to TwitterShare to FacebookShare to Pinterest
Labels: George Knapp, Roadrunners, Shadowhawk
Newer Posts Older Posts Home
Subscribe to: Posts (Atom)
In the 1990s, I was the unofficial publicist for Area 51, helping to make it a household name. Although, I am no longer actively researching the base, I may occasionally have some information or links to pass on. This blog and the Tikaboo Peak Page on Facebook are my forums for doing so.