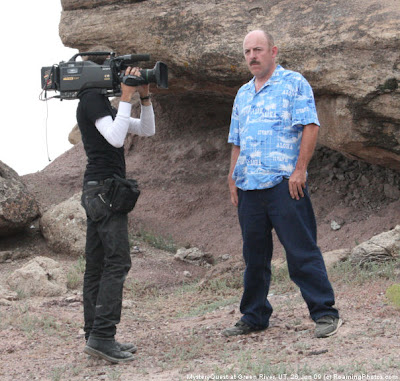 Ratings for the Area 51 UFO Hunters show were so good that History Channel has come back for more! There will be a brand new Area 51 episode airing this Wednesday at 10pm on a new series called MysteryQuest. Not promising any revelations, mind you, but Yours Truly will be probably be getting a fair amount of gratuitous face time. (Above, he is trying to look serious for his "hero shot".)

The main new thing about this episode is the first-ever televised visit to the abandoned Green River Missile complex in Utah (named as the "New Area 51" by Popular Mechanics a few years back). We will be sneaking around in underground facilities there and discovering (as you might have guessed) no new Area 51 there.

The episode filmed back in June. To bring you up to speed, here is my photo album of the shoot. Also check out this blog regarding the previous UFO Hunters show and Green River. 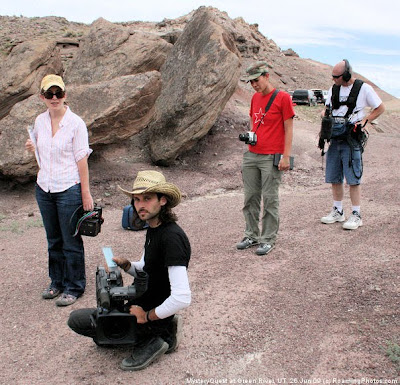 Email ThisBlogThis!Share to TwitterShare to FacebookShare to Pinterest
Labels: Green River - Utah, MysteryQuest
Newer Posts Older Posts Home
Subscribe to: Posts (Atom)
In the 1990s, I was the unofficial publicist for Area 51, helping to make it a household name. Although, I am no longer actively researching the base, I may occasionally have some information or links to pass on. This blog and the Tikaboo Peak Page on Facebook are my forums for doing so.