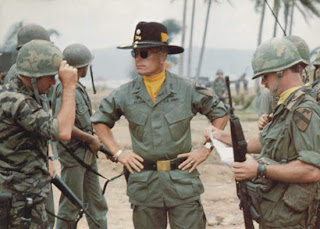 Ah, it's just like the old days! We've been back in operation for less than a week, and already we've been suppressed!

Since we went to sleep a decade ago, the premiere website for Area 51 information has been DreamlandResort.com -- a highly credible site with lots of good information. It even includes a discussion board where authorized members can post their own comments and discuss current affairs.

But now all discussion of Glenn Campbell has been banned by the moderator.

Oooo, this is TOO good! We started our blog on Aug. 11, and on Aug. 12 someone posted a message to that effect on the discussion board: "Glenn Campbell is Back!"

There were several messages in reply, seemingly innocuous enough, but by the end of the following day, the moderator "Hank" decided that enough was enough. "I would appreciate no further posts to the Glen Campbell thread." This was seconded by the webmaster "Joerg" who wrote: "And I am sure he does not mind some free advertisement in this forum. We generally try to avoid this. Thanks!"

When someone asked why Glenn Campbell had been banned, Joerg wrote back: "Because Hank is the moderator and he said so. End of discussion."

So now Glenn Campbell can't be mentioned on what purports to be the premiere Area 51 forum. Apparently, he is seen as a commercial opportunist just out to make money. (It should be noted that the Dreamland Resort website itself is chock-a-bloc full of advertizing for cars, hotels, dating services, etc.)

The original Interceptors always TRIED to be all-inclusive. There were no real admission criteria; you just had to give yourself a code name and show up at our events. Now the new guys on the block are saying that the old guys (call us the "Grays") don't deserve to be mentioned or included in any discussion of Area 51.

Not that we mind having opponents! Why should we fight the government when internecine warfare is so much more fun? GUFON hasn't shown up so far, and no one knows what happened to CHUCKIE or SEAN DAVID MORTON, so we were worried for a while that no one would care enough to put us down. Now we see that our fears were unfounded.

Suppression is good for the soul -- just the sort of thing to breath life back into Psychospy! (Looking we're even lapsing back into the second person.)

We love the smell of napalm in the morning!

(BTW: ANYONE is free to post comments on this blog. You just have to have a free Google account -- which almost everyone has anyway. As long as your comments are relevant to the discussion and not obscene, we won't suppress them.)

Posted by Glenn Campbell at 9:56 PM