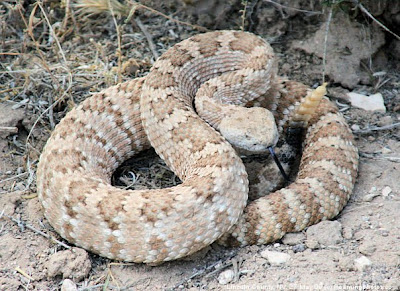 On a visit to Area 51 with Agent Chameleon on May 27, I passed two personal milestones.

One is shown above. I saw my first rattlesnake in the Tikaboo Valley! I photographed this fellow just a few feet from Groom Lake Road about a mile before the border. Here's two more shots... 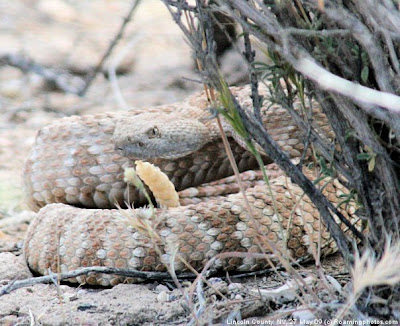 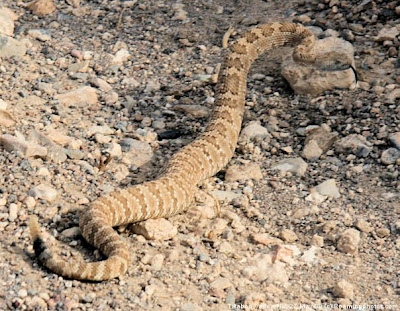 He was about 3-4 feet long and did us the honor of coiling and rattling when followed.

It's funny that for all the time I spent in this valley in the 1990s, I never saw a live rattler here. (I once saw a baby one at the north end of the Groom Range near Rachel and a dead one from the highway near Rachel. Also a huge one crossing the road near the HOLLYWOOD sign in Los Angeles.)

My other milestone may or may not be related to rattlesnakes: At Chameleon's urging, I stepped into the Little A'Le'Inn for the first time in 13 years. Here's the proof... 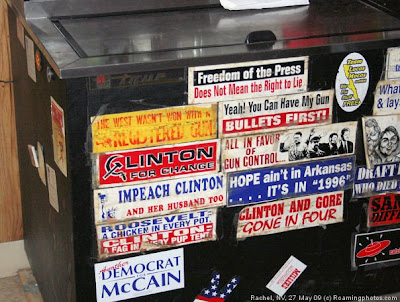 Those are the same anti-Clinton bumper stickers I remember during the 6 months I stayed at the inn in 1993.

Readers may recall that I got ejected from the inn by a drunken Joe Travis in the Summer of 1993, for reasons that were only in his mind. I then went to the other end of town and started my own Area 51 Research Center. Things could have been patched up between us years ago, but I decided that I liked the idea of being "Banned at the Little A'Le'Inn" and I passively kept the feud alive.

I was half expecting to be ejected from the Inn when I walked in this time, but Pat and Connie weren't around, so the opportunity never arose. I didn't recognize anyone there, and no one recognized me.

Walking into the Inn was a little like walking into a time capsule. I have been through many adventures in the past 13 years, but the Inn was almost unchanged. The bar had been moved, but most of the same displays were on the walls.

The most traumatic part of the experience was deciding what beer to order! In all of my life, I had hardly ever ordered a beer at a bar before. In consultation with Chameleon, I settled on a Bud Light. What I received for my order was a naked can stuck in front of me, after the bartender took it out of a cooler and pulled the tab for me. It took a while, but I drank the whole thing!

Talk about your alien experiences! I will never understand this "bar" concept.
Posted by Glenn Campbell at 6:36 PM