It's the 20-Year Anniversary of Lazar Story! 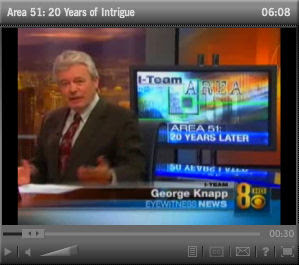 Believe it or not, this month marks the 20-YEAR ANNIVERSARY of the Bob Lazar flying-saucers-at-Area 51 story. It was in May (or April?) of 1989, that George Knapp first reported the claims of Bob Lazar on a local Las Vegas newscast. It is remarkable how little most things have changed. Knapp, for example, is still doing exactly the same thing, for the same TV station. Here is his report yesterday on the 20-year anniversary....

If you did a "where are they now" retrospective, you'd see a lot of guys getting older and grumpier but otherwise not changing much.

(I like to think Psychospy is the exception to the rule and has stayed dynamic, but for the record he wasn't actually around in 1989, arriving only in late 1992.)
Posted by Glenn Campbell at 12:55 PM