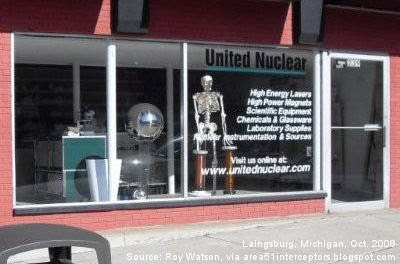 A reader of this blog, Roy Watson, just happened to pass through Laingsburg, Michigan last month and checked out Bob Lazar's new lair (for his one-man company United Nuclear). It's a storefront in the tiny town's main street. We wonder how much foot traffic he gets from farmers passing by. Here is our informant's report....

I live in Burlington, VT but have had a business trip to Lansing, MI scheduled for a while. I had spent 15 months in Lansing on an extended business trip a couple of years ago. When I saw your post about Bob Lazar moving United Nuclear to Laingsburg, Michigan, I recognized that town as being just a few miles from Lansing. So I started watching the progress of the move on the United Nuclear website. Luckily they just completed the move before I arrived in Lansing.


So, this afternoon I drove up to Laingsburg with my wife with the hopes of meeting Bob. Alas, they were locked up and no one was to be seen. Though I could see bench lighting on at a work table in the back. so he may have been there but was working on secret government research and could not answer the door without violating numerous MAJ security protocols. Or he could have been in the bar down the street … or on the toilet. Above is a fresh photo (2:30 pm, Friday, 10/31/08) of United Nuclear's retail space. It's actually much more than I expected.


Once again I found myself wondering how someone decides to move his "facilities" from the Sandia Mountains outside Albuquerque to Laingsburg, Michigan. Then, exactly 6.9 highway miles from United Nuclear's front door, I found the answer. At first, looking at the smallish diameter, I thought this was on of Bob's famous "sport models". Further examination revealed it was the much rarer "Cub Cadet" model. 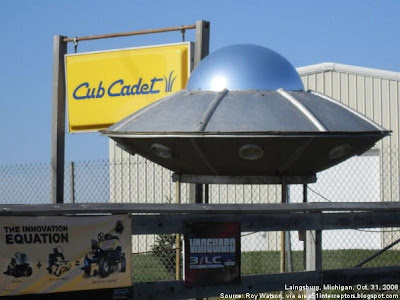 
I have been fascinated with Bob Lazar ever since I first heard him verbalize his story in the 1980's. Like you, I am drawn to his skill in telling an otherwise "out of this world" tale in a way that captivates people. He weaves in just the right amount of ignorance of details, modesty and reluctant participation to make it all seem so real and believable. I find myself oddly attracted to his personality and his story, though I really don't believe in it, at least most of it. I was very disappointed I didn't get to meet him.