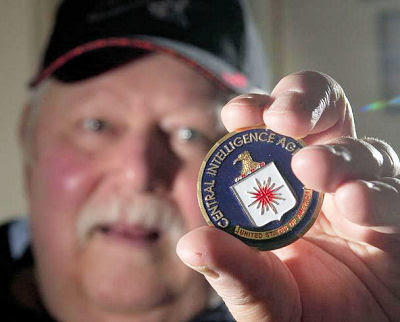 Area 51 vets break silence: Sorry, but no space aliens or UFOs - Newly revealed stories from people who used to work at Area 51 shed light on a site still shrouded in mystery.

Noce and Barnes say they never saw anything connected to UFOs.

Barnes believes the Air Force and the "Agency" didn't mind the stories about alien spacecraft. They helped cover up the secret planes that were being tested.

On one occasion, he remembers, when the first jets were being tested at what Muroc Army Air Field, later renamed Edwards Air Force Base, a test pilot put on a gorilla mask and flew upside down beside a private pilot.

"Well, when this guy went back, telling reporters, 'I saw a plane that didn't have a propeller and being flown by a monkey,' well, they laughed at this guy — and it got where the guys would see [test pilots] and they didn't dare report it because everybody'd laugh at them," says Barnes.

Posted by Glenn Campbell at 3:57 PM

Email ThisBlogThis!Share to TwitterShare to FacebookShare to Pinterest
Labels: Roadrunners