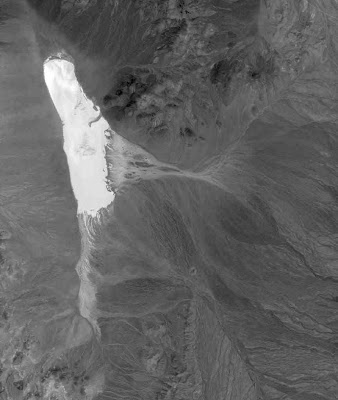 Someone recently emailed me to help them find a 1997 Las Vegas Sun article on Jerry Freeman. Freeman was an amateur archeologist from California who held the distinction of being the only person without a security clearance to have visited the Papoose Lake area since Bob Lazar made his claims about flying saucers there. In the mid-1990s, Freeman was determined to follow, on foot, the trail of the "Lost 49'ers" who nearly died when they took a "short cut" through Death Valley in 1849 (giving it its name), but he was thwarted by the government when they refused to let him pass through the Nellis Range and the Nevada Test Site.

But he did it anyway! After some research, he crossed 100 miles of Restricted Area on foot, without government permission, and lived.

Well, not exactly. He's dead now, but that happened four years after he completed the trek. The point is, it can be done, if you are determined or foolhardy enough: Just march into Papoose Lake and see for yourself whether Lazar's claims are true.

In July 1997, The Sun published a story on Freeman's trek. (Apparently because he himself contacted them.) The article had been available on the Sun's website until recently, when it mysteriously vanished. I was contacted because I had made reference to it in a 1997 mailing list posting. The correspondent wondered whether I had saved a copy.

I hadn't, but I still managed to find it. As I suspected, the article was still there on the Sun's website but was poorly indexed. Here it is...

Stealth Search for History (Las Vegas Sun, 7/19/97)
I recall there being photos of Freeman in the print version of the article, but they're not attached to the online one. (And I couldn't find any photos of him on the web.)

I met Freeman at least twice, both before and after he made his trek. My memory is hazy, but we may have discussed the logistics of make such a journey, and I certainly would have advised against it. When he actually completed it, I was surprised. I was halfway between admiring his balls and shaking my head at his stupidity. (He reminded me, both then and now, of Mathias Rust, the German teenager who landed a plane in Red Square in 1987.)

Of course, I debriefed him on what he saw when he passed by Papoose Lake, but nothing sticks in my mind as memorable. I recall he passed to the south of the lake, never actually touching the dry lake bed. I think he camped in that vicinity. He may have described to me some ambiguous lights or glints he saw on the ground, but there was nothing I could do anything with at the time, and I don't recall any of the details now.

What sort of security did he encounter? None whatsoever. This is exactly what one would expect if the land is what it claims to be: a mostly vacant testing and training ground. With a land area equivalent to Connecticut and Rhode Island combined, the Restricted Zone is virtually unpatrollable, except where there are specific assets to protect. (Papoose Lake is in the next valley over from Area 51.) If you come in by vehicle on a road, you are going to be detected, but maybe not on foot.

Freeman's obsession was following the 49ers route, not the UFO lore, but he was happy to share information with me. It's just that his information wasn't very interesting. It certainly wasn't worth putting ones life at risk as he did.

A 100-mile trek across the desert might have killed anyone else, but Freeman had the survival skills to pull it off. As I recall, his life depended on being able to access certain springs on the Nevada Test Site that maps said were there but that he couldn't verify until he actually arrived. Would the water still be there? Would it be radioactive? If he hadn't found water, he would have had to deliberately get himself arrested. This alone might have been a major feat: finding someone to turn himself in to.

Keep in mind, this was a family man. In my mind, if you have people depending on you, you don't put yourself at risk like that. I saw Freeman as another victim of "Male Data Collection Syndrome" (MDCS), a disease that I myself am in recovery from. (5 years sober.) If the MDCS sufferer needs certain data, he'll stop at nothing to collect it, even if isn't really meaningful in the bigger scheme of life.

Freeman died of cancer in 2001. Here is an obituary. For the record, the cancer started before he took his hike, since the obit says he was first diagnosed 5-1/2 years prior.

Just an odd little footnote to history.
Posted by Glenn Campbell at 6:19 PM